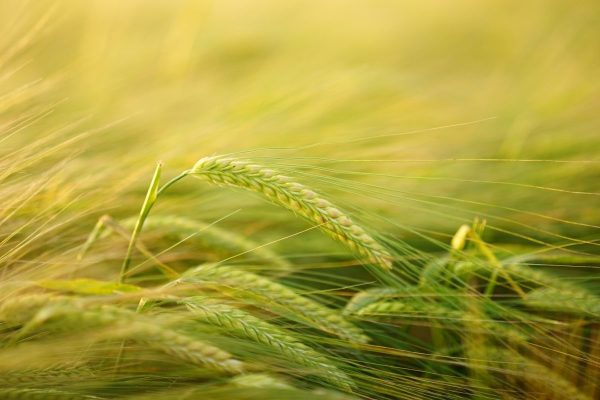 Image by Hans Braxmeier on Pixabay

Harvest begins with barley, or winter barley, to be precise

Barley – the cereal grain with long awns – is the earliest of the types of grain to be cultivated. Summer barley is used in brewing, while winter barley is predominantly used for animal feed. Compared to summer barley, winter barley can achieve higher yields and has a higher protein and vitamin content. The barley grains grow with husks. This ensures a high percentage of cellulose (≈ 8-15%). The barley grains consist of carbohydrates, mostly starch (60-70%), proteins (11%), fibre (10%), fat (2%) and minerals (2%). In addition to the original barley, there are now some varieties of naked barley, in which the grains are not so closely attached to the husks. This simplifies the harvest and offers a lower risk of damaging the germ buds.

Due to breeding successes, barley yields are similar to wheat yields, particularly in unexceptional locations. However, due to the temperature fluctuations, including frosts, in the spring it seems likely there will be yield losses this year. Frost damage has already become apparent in parts of Bavaria, Baden-Württemberg and Thuringia. One of the consequences is unripe crops with ears that have not properly filled out. In some cases, only individual ears are affected, but it may lead to losses of up to 90%. It has not been possible to distinguish between different varieties as both 2-row and multi-row varieties are affected. The reason for such widespread damage was the development stage of the barley crop during the frosts. In some of the affected areas, the barley has already been harvested as a whole plant silage (WPS). However, this decision must be weighed up and made according to individual farm-related factors: use of the barley as feed or barley straw on the farm, integration of the catch crop in the rotation, water availability or subsidy restrictions.

Barley is generally considered to be a rather undemanding plant in crop production that grows in various soils and tolerates even harsh weather conditions. Nevertheless, some special features of cultivation should be taken into account in the case of barley, and especially winter barley:

Location: Overall, barley does not make high demands on the soil and thrives on ground with a soil quality of >30. Barley does not have a very strong root system, so it reacts sensitively to unfavourable soil conditions such as soil compaction. On the other hand, it likes deep, well-moistened, slightly acidic to neutral (pH 6.0-7.0) soils that dry quickly and absorb warmth in the spring. Good water availability in the tilling stage is important for barley. The winter hardiness of barley is less pronounced. Locations with frequent frosts tend to be unsuitable as a result.

Tilling: Winter barley requires well-prepared soil for sowing. The seed bed should be fine and dense to avoid uneven emergence and ensure that the seed grains can receive sufficient moisture for germination. In addition, it is advantageous for the soil to be well loosened.

Crop rotation: Barley is not very self-tolerant, so that breaks in cultivation of one to two years are recommended. Suitable previous crops are potatoes, as well as legumes and maize for winter barley.

Sowing: In the case of winter barley, sowing is carried out in early autumn, from late August until the end of September, so that the formation of secondary shoots (tillers) is completed before winter. Ideally, an accumulated temperature of 800°C should not be exceeded between sowing and the winter solstice. For this reason, drilling should not be carried out too early at locations with warmer autumns and milder winters. In order to develop before winter, winter barley requires 50-55 days to form well-stocked plants with four to six tillers. Winter barley is well able to tolerate temperatures as low as -15°C during the winter months. The seed density is 400 germinable grains/m2 for 2-row varieties, or 350 germinable grains/m2 for 6-row varieties. The seed density should be selected so as to achieve an optimal ear density of 500-600 ears/m2 for multi-row and 700-800 ears/m2 for 2-row winter barley. The seed depth should be 2-4 cm at a row spacing of 8-16 cm. When sowing, barley is husked and has a thousand-grain weight of about 40-50 g. The germination capacity is more than 90%. Rolling the seed is recommended to improve the contact of seed with the soil, as this promotes germination and field emergence.

Fertilisation: Since barley does not have a strong root system, its nutrient acquisition capacity is not very pronounced. Therefore, a good nutrient supply is important, so a basic fertilisation with phosphorus and potassium should be carried out before sowing, since larger quantities of nutrients are needed in the autumn and potassium improves the winter hardiness. In the autumn, a fertilisation of approximately 30 kg N/ha is necessary.

Plant protection: With barley, mechanical weed control is carried out by harrowing; after sowing and before emergence through so-called blind harrowing. Plant losses from the 3-4-leaf stage are balanced out by increased tillering, with a 10% higher sowing density. In addition, the choice of variety can influence the plant protection measures. For example, hybrid barley varieties can reduce the risk of crops being affected by localised, soil-related fungal diseases, such as Fusarium. In addition, barley can suppress undesirable weeds such as black grass. The green barley leaf absorbs the red light which is necessary for the germination of black grass, leading to suppression.

Harvest: The barley is harvested when it is fully or overripe. During combining, attention must be paid to the weight (wind adjustment) and the activation of the de-awner. Barley is then stored with its husks on.

Yields: The yields of winter barley are between 50-90 dt/ha.

Winter barley is the first crop to produce spikelets in December (double ring stage). Before this, a branched and deep-reaching root system has developed. The tips of the roots synthesise cytokinine, which supports tillering and ensures well-developed spikelets. Through the early root formation, soil drainage and ventilation as well as the entire soil structure are improved with good capillarity. This makes it easier for the soil to retain water and nutrients in the fine capillaries, and excess water can also drain away faster. However, due to a pronounced secondary dormancy, barley must also absorb plenty of water. A barley grain needs 50-60% of its own weight in water in order to germinate. Water absorption is significantly lower in the case of rye and wheat. If barley does not get enough water, germination is suspended. In addition, higher soil temperatures lead to secondary dormancy. This lasts until sufficient moisture is present at lower temperatures. It can therefore happen that winter barley grows in the second or third year after cultivation.